Can Living in the City Make you Gay?

Cross-posted at Inequality by (Interior) Design 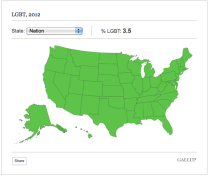 Gallup recently published results from a new question garnering a nationally representative sample of more than 120,000 Americans: “Do you, personally, identify as lesbian, gay, bisexual, or transgender?”  The results come out of interviews conducted in 2012 and confirm recent estimates by demographer Gary Gates on the size of the LGBT population in the U.S.  Combining data from a range of surveys, Gates suggested that approximately 3.5% of the adult population in the U.S. identifies as lesbian, gay, or bisexual, and an additional 0.3% identifies as transgendered.

The Gallup poll also found that around 3.5% of the U.S. adult population says “yes” when asked whether they “identify as lesbian, gay, bisexual, or transgender.”

These findings are interesting and important for a number of reasons.  One issue that they bring up is simply the issue of actually measuring sexuality.*  It’s harder than you might assume.  For instance, Gallup asks how people identify themselves.  Questions about sexual identification produce some of the lowest percentage of LGBT responses on surveys.  Asking questions about  sexual desires and behaviors produces higher percentages.  Questions about same-sex attraction have found that as much as 11% of the U.S. population can be classified as LGB. 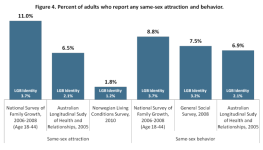 Similarly, questions concerning same-sex behaviors have produced numbers as high as 8.8% of the U.S. population.  This doesn’t mean that the Gallup findings are unimportant; it means that we need to recognize that sexuality is more dynamic that we might initially assume.

Subsequently, Gallup released a report documenting the relative prevalence of LGBT individuals throughout the U.S.  Simply put, LGBT individuals are not uniformly distributed throughout the country.  Some places have relatively high numbers, while other have lower numbers.  Gallup chose to break this down by state.  The state with the highest proportion is not actually a state at all; it’s a federal district—the District of Columbia (10%).  The state with the lowest proportion of “yes’s” to the question was North Dakota (1.7%).

It’s an interesting commentary on the geography of sexuality.  I’ve decided that the report is less meaningful than it might initially appear.  A break-down by population density within states would be much more interesting.  This is one of the reasons that Washington D.C. (at 10%) appears to be a bit of an outlier in the report.  T

he next closest state is Hawaii, with 5.1%.  D.C. is a city, and cities have more LGBT individuals.  So, it would be more meaningful to compare D.C. with Los Angeles, Chicago, and Atlanta than with Nebraska, Wyoming, and Arkansas.  This is why Edward Laumann, John Gagnon, Robert Michael, and Stuart Michaels (1994) included questions about the “level of urbanization of current and adolescent place of residence” in their survey of sexual practices, identities, and desires (here).

One of the more interesting features of the distribution of same-gender sexuality by type of place is that it helps explain some of the disbelief expressed by members of the gay community in response to recent estimates of the prevalence of homosexuality…  [O]ur data indicate that about 9 percent of eighteen- to forty-nine-year-old men living in the largest cities in the United States currently identify as either homosexual or bisexual; a higher proportion (14 percent) have had male sex partners in the last five years; and an even higher proportion report some level of sexual attraction to other men (about 16 percent). (here: 307)

They’re only talking about men here (and are also not discussing transgendered individuals), but their interest in population density is significant.  The same issue occurs when we visualize states as either “red” or “blue” in elections.  This simple fact disguises the diversity of red and blue spaces within each state.

Physicist Mark Newman presents a variety of ways of visualizing election results that illustrate the choices that go into deciding both what is meaningful in the data and how to present it to highlight the meaning.  Thus, just as an example, Newman illustrates the ways that state-level visualizations of election results actually hide a lot of meaningful data that might cause us to think very differently about how people in the U.S. are voting.  Imagine a similar map for proportions of LGBT individuals throughout the U.S.  It makes the state-level analysis seem a lot less meaningful.

Laumann and colleagues came up with two explanations to account for the larger proportion of same-gender sexual practices, interest and identifications among people in larger cities.  The first, they call the migration model.  This is simply that “People interested in sex with people of their own gender move to more congenial social environments” (here: 308).  In a sort of anti-diaspora, the migration model suggests that LGBT individuals may have to migrate to places unknown to find “home.”  This is consistent with a good deal of scholarship, and bears out work like Kath Weston’s “Get Thee to a City.”

The other explanation Laumann, et al. offer they call the elicitation/opportunity model.  Rather than moving to social spaces with larger proportions of LGBT individuals (migration model), this model suggests that there might be something about growing up in these environments that might affect their sexualities.  So, rather than asking whether LGBT people are moving to cities, they’re asking the extent to which cities might play a role in causing people to identify as LGBT.  They measured it by asking about the level of urbanization for both current residence and residence while growing up (something respondents likely had less control over). 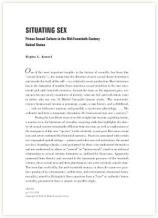 This is consistent in some ways with John D’Emilio’s historicization of the emergence of gay identity in the U.S. as structurally enabled by industrialization.  As men were pulled into increasingly homosocial environments, homosexual behavior was simply more possible.  This is also what might account for the “situational homosexuality” that we see in prisons or when men have gone to war.

Laumann, et al. found that the elicitation/opportunity model had more explanatory power for men than for women.  They suggested that this might imply that “homosexuality among men and women in the United States may be socially organized quite differently” (309).  Perhaps we could learn more about this if we present and analyze Gallup’s new data a bit differently.  The presentation of the data at the level of state is interesting, but I’d be much more interested in seeing the data presented by population density within states.  How about you?

[See also: Comments to the post on Inequality by (Interior) Design were really interesting and deserve more attention.  See the comments to that post here.]

This entry was posted in Uncategorized. Bookmark the permalink.

11 Responses to Can Living in the City Make you Gay?